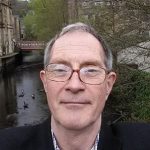 Canadian author Geoff Ryman has won 15 awards for his stories and ten books, many of which are science fiction. His novel Air (2005), won a John W. Campbell Memorial Award, the Arthur C. Clarke Award, the James W Tiptree Memorial Award, the Canadian Sunburst Award and the British Science Fiction Association Award. It was also listed in The Guardian’s series ‘1000 Novels You Must Read’. In 2012 his novelette ‘What We Found’ won the Nebula Award in its category and his volume of short stories Paradise Tales won the Canadian Sunburst Award. Much of his work is based on travels to Cambodia such as ‘The Unconquered Country’ (1986), winner of the World Fantasy Award and British Science Fiction Association Award. His novel The King’s Last Song (2006) was set both in the Angkor Wat era and the time after Pol Pot and the Khmer Rouge. His other mainstream fiction includes Was (1992), a novel about the American West viewed through the history of The Wizard of Oz. His hypertext web novel 253: a novel for the Internet in Seven Cars and a Crash, in which 253 people sit on a London tube and are each described in 253 words, won the Philip K. Dick Memorial Award for best novel not published in hardback. The published Print Remix of the same novel (1998) is his most popular book. In 2011, Geoff Ryman won the Faculty Students’ Teaching Award for the School of Arts, History and Culture. 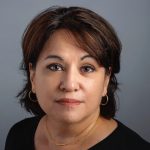 Alma Katsu is the author of seven novels. She has been twice nominated for both the Stoker and Locus Awards for best horror novel, nominated numerous times for Goodreads’ Reader Choice awards, and appeared on the Observer, Apple Books, Amazon, Barnes & Noble and other outlets’ best book lists. The Hunger, which the NYT called it “supernatural suspense at its finest”, was named one of NPR’s 100 favorite horror stories, and won Spain’s Kelvin 505 award for best scifi/fantasy/horror novel and the Western Heritage Award for best novel. Red Widow, her first espionage novel, was a NYT Editor’s Choice pick, has been nominated for the International Thriller Writers’ award for best novel, and is currently in development for a TV series. Her debut novel, The Taker, was one of Booklist’s top ten debut novels of 2011. 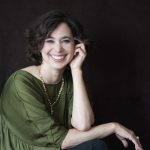 Anjali Sachdeva’s short story collection, All the Names They Used for God, was named a Best Book of 2018 by NPR, Refinery 29, and BookRiot, longlisted for the Story Prize, and chosen as the 2018 Fiction Book of the Year by the Reading Women podcast. The New York Times Book Review called the collection “strange and wonderful,” and Roxane Gay called it, “One of the best collections I’ve ever read. Every single story is a stand out.” Sachdeva is a graduate of the Iowa Writers’ Workshop and has taught writing at the University of Iowa, Augustana College, and Carnegie Mellon University. She also worked for six years at the Creative Nonfiction Foundation, where she was Director of Educational Programs. She currently teaches at the University of Pittsburgh and in the MFA program at Randolph College. She has hiked through the backcountry of Canada, Iceland, Kenya, Mexico, and the United States, and spent much of her childhood reading fantasy novels and waiting to be whisked away to an alternate universe. Instead, she lives in Pittsburgh, which is pretty wonderful as far as places in this universe go. 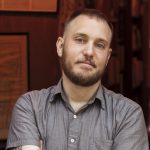 Sam J. Miller is the Nebula-Award-winning author of The Art of Starving (an NPR best of the year) and Blackfish City (a best book of the year for Vulture, The Washington Post, Barnes & Noble, and more – and a “Must Read” in Entertainment Weekly and O: The Oprah Winfrey Magazine). A recipient of the Shirley Jackson Award and the soon-to-be-renamed John M. Campbell Award, and a graduate of the Clarion Writers’ Workshop, Sam’s short stories have been nominated for the World Fantasy, Theodore Sturgeon, and Locus Awards, and reprinted in dozens of anthologies. He lives in New York City, and at samjmiller.com. 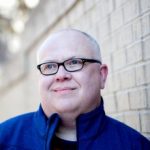 Christopher Rowe is the author of the acclaimed story collection, Telling the Map (Small Beer Press), as well as a middle grade series, the Supernormal Sleuthing Service, co-written with his wife, author Gwenda Bond. He has also published a couple of dozen stories, and been a finalist for the Hugo, Nebula, World Fantasy and Theodore Sturgeon Awards. His work has been frequently reprinted, translated into a half-dozen languages around the world, and praised by the New York Times Book Review. His story “Another World For Map is Faith” made the long list in the 2007 Best American Short Stories volume, and his early fiction was collected in a chapbook, Bittersweet Creek and Other Stories, also by Small Beer Press. His most recent stories are “Jack of Coins” and “Knowledgeable Creatures” at Tor.com, selected by editor Ellen Datlow, and “Nowhere Fast” in Candlewick’s young adult anthology, Steampunk!, edited by Kelly Link and Gavin Grant.

He has an MFA from the Bluegrass Writers Workshop and lives in a hundred-year-old house in Lexington, Kentucky, with his wife and their many pets. Izzy the Dog, and Puck the Dog. 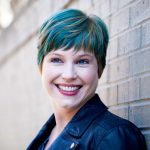 Gwenda Bond is the New York Times bestselling author of many novels. Among others, they include the Lois Lane and Cirque American trilogies. She wrote the first official Stranger Things novel, Suspicious Minds. She and her husband author Christopher Rowe co-write a middle grade series, the Supernormal Sleuthing Service. She also created Dead Air, a serialized mystery and scripted podcast written with Carrie Ryan and Rachel Caine, and is a co-host of Cult Faves, a podcast about the weird world of cults and extreme belief.

Her nonfiction writing has appeared in Publishers Weekly, Locus Magazine, Salon, the Los Angeles Times, and many other publications. She has an MFA in writing from the Vermont College of Fine Arts. She lives in a hundred-year-old house in Lexington, Kentucky, with her husband and their unruly pets. There are rumors she escaped from a screwball comedy, and she might have a journalism degree because of her childhood love of Lois Lane. She writes a monthlyish letter you can sign up for at www.tinyletter.com/gwenda. 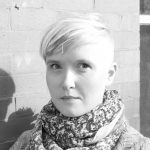